This year, a team of students from the Faculty of Science and Technology took part in the International Genetically Engineered Machine (iGEM) competition – a first for Nantes. They attended the get-together – the Giant Jamboree – which took place at the MIT (Massachusetts Institute of Technology) in Boston between 31st October and 4th November 2019 and were awarded a silver medal.

The iGEM competition is a synthetic biology competition for students and has been organised since 2004. Teams that register must set up a project and, every year, they come to the competition’s closing event – the Giant Jamboree – to present their projects to an international panel of judges. This year, it took place between 31st October and 4th November at the prestigious MIT, in Boston, which organises the competition. Almost 6000 students from more than 40 countries attended the event, presenting more than 300 projects! 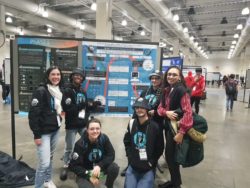 The Nantes iGEM team, made up of 15 students from the Faculty of Science and Technology, presented its “Bio’Clock” project to the international judging panel on Sunday 3rd November. They explained how, with the aid of sugar, they have succeeded in monitoring gene expression over time by specifically working with fluorescent bacteria.

The Giant Jamboree ended on Monday 4th November and the team from Nantes was delighted to be awarded a silver medal: a reward for the students’ hard work, as well as the commitment of the team of lecturers, PhD students, etc., which supported them throughout the year. Congratulations to everyone for this outstanding achievement!

Article published by the University of Nantes