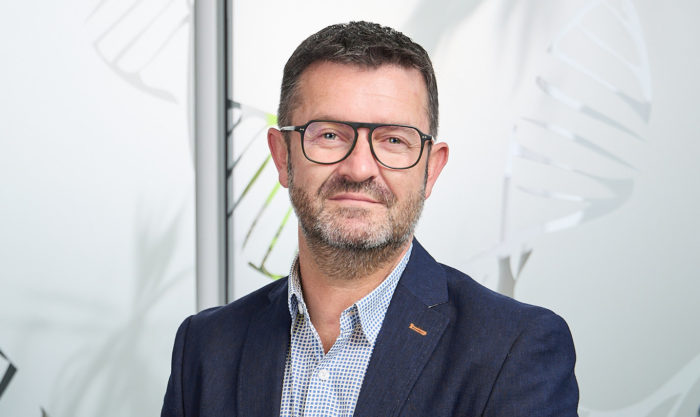 Leader of a group of over 200 people at Clean Biologics, a company offering a range of high-tech services to biotechs and large pharmaceutical corporations, supported by a quality team, Olivier Boisteau directs and coordinates the company’s sustained dynamic growth. Clean Biologics pursues a strategy of organic growth aimed at improving its biopharmaceuticals analysis capabilities and is considering new acquisitions that would allow the group to strengthen its position in the field of subcontracting and biopharmaceuticals. Deeply engaged with the issue of national sovereignty and the manufacture of biopharmaceuticals, Olivier Boisteau is running for re-election in order to make his voice heard both within the cluster and with influential public stakeholders, and to actively participate in building the biopharmaceuticals industry of the future.

The group holds 100% of the shares of 3 business entities: Clean Cells (biopharmaceutical quality control testing), Naobios (development of bioprocesses and production of clinical lots of viral vaccines) and Biodextris in Montreal (which recently acquired a company that produces viral and protein-based vaccines).

The group is currently building a 5,250 m² facility in Montaigu-Vendée which will enable it to further develop its quality control capabilities. The current site will become a CDMO dedicated to bacteriophage manufacturing, one of the activities pioneered by Clean Cells. The group is also considering the creation of a separate facility dedicated to the development of bioprocesses and the manufacture of clinical lots of bacteriophages for phage therapy.

Nationwide strategy to relocate the production of pharmaceuticals

During the health crisis, Naobios and Government departments discussed the options for manufacturing lots of viral vaccines to combat COVID-19. Setting up a manufacturing facility capable of producing commercial lots would have required an investment of around 90 million euros. The project did not proceed due to a lack of funding.

“No bank would have agreed to take on this project, which would have required a major State undertaking. The fact is, SMEs cannot engage in major risk-taking initiatives without significant State backing. We decided a better option was to help push advancements in French biomanufacturing by strengthening our market position in the field of vaccine quality control testing, seeking State backing for this development approach, which is more focused and better aligned with the Group’s financial resources” explains Olivier Boisteau.

One opinion shared by many of the cluster’s SME executives and by other French healthcare clusters is that it is the SMEs that are driving innovation.

“Large financial aid packages, amounting to several hundred million euros, should favour SMEs as it is the biotech companies who will be the prime drivers of future growth and development in the biopharmaceuticals industry. We can either choose to develop this activity sector, to grow SMEs into ISEs, building on the skills and expertise within our territories, or we can persist in thinking that the major innovation breakthroughs are going to come from Big Pharma, thus having them benefit from major financial assistance that would be of far more value to SMEs. Big Pharma has its role to play, and it does it very well, but it is no longer the only player on the field”.

Building together at national level

“Over the last 20 years we have witnessed a catalogue of missed opportunities. If we are going to develop a successful biomanufacturing industry, we have to take a more collaborative approach. This means structuring our ecosystems, each in their own sphere but together, … and making sure that the State is involved.“

Olivier Boisteau wishes to be involved in this issue and, as CEO of Clean Biologics and an administrator of the cluster, he is committed to strengthening synergies between local authorities, academic players and the economic fabric on the one hand, and biotech, Big Pharma, CRO and pharmaceutical subcontractors on the other, with the aim of positioning France and Europe to spearhead the development of the exclusively organic biopharmaceuticals of the future.

“In a nutshell, what it means is replicating on a national scale the success stories already celebrated in our regions! It’s no coincidence that the government came to see what we’re doing to achieve such success! “

He is therefore seeking a new term in office as an administrator of Atlanpole Biotherapies in order to deliver his message, not only within the cluster but also with other stakeholders, in particular France Alliance Bioproduction. He also intends to push clusters to change their assessment criteria, refocusing them on skills areas, job numbers and the development of new products or services.

“The health crisis has placed certain cluster members firmly in the spotlight due to their development of vaccines or treatments against Covid. We need to support all these developments in the broadest possible terms as, even if we don’t know whether a given development will work (which is not the case for the vaccines and treatments referred to earlier) it still drives progress in science. We need tangible efforts and meaningful commitments by public authorities”.

As a past president of Atlanpole biotherapies, another of his battles is to encourage local populations and civil society to sign up to this approach, and to raise people’s awareness of the role played by biotechs: he ended by saying “our role is to find treatment solutions, and to develop safe biopharmaceutical products that mimic the body’s own self-defence mechanisms”.